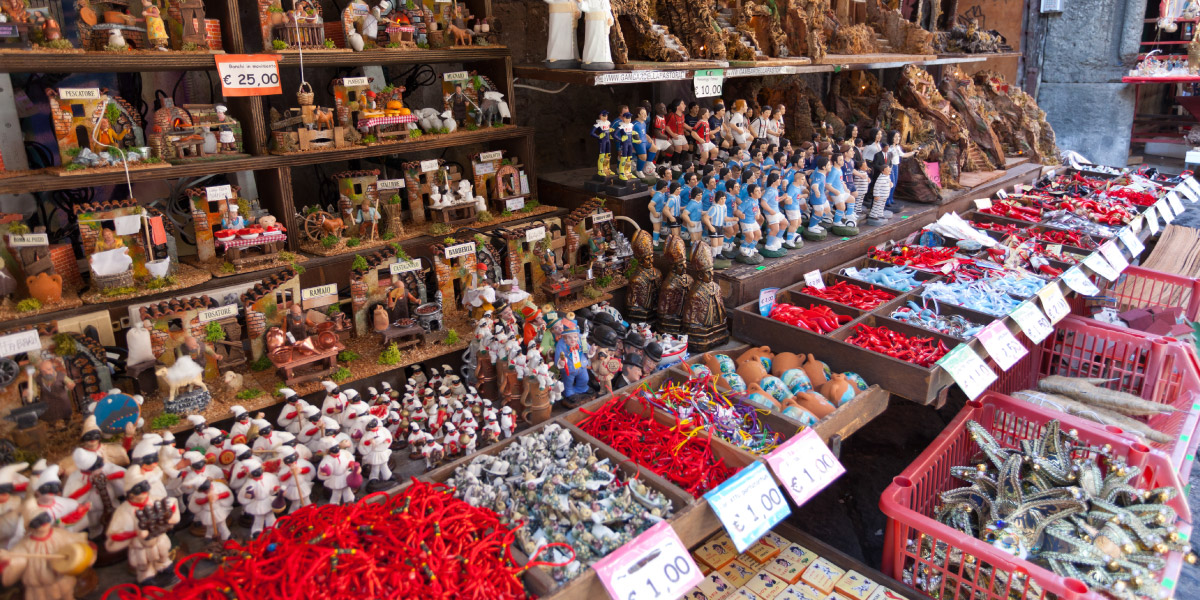 If for many today Christmas is symbolized by the lights and colors of the Christmas tree full of balls, decorations and crowned by a sparkling tree topper, in Naples remains the strong custom of placing it alongside the traditional crib: a creation rich in art, history and imagination, with its rules and characteristics. An example? The wise men should be added to the crib only on the eve of the Epiphany! Alternatively, it is preferable to choose for them small statues and place them in perspective away from the manger, in order to symbolize the long way. In Naples, the kingdom of the crib is located in the historic town center, precisely in a street called San Gregorio Armeno. It is here that Neapolitan spirit and manual art coexist to create something extraordinary and original, which attracts hundreds of tourists and gives appointment to the same Neapolitan citizens every year. A place made of small shops and masters, whose work lights up during the Christmas period, but that silently continues throughout the year.

Do you want to know the history of this extraordinary place?

San Gregorio Armeno is popularly called San Liguoro and, from an urban point of view, connects the two ancient streets of Via dei Tribunali and Spaccanapoli. Later, it took the name of Plateia Nostrana, when two spas for the poor were built there by the XV bishop of Naples: San Nostriano. Today, as we know, the “street of the crib shops” is known all over the world as San Gregorio Armeno, because it takes its name from the church of the same name located about halfway, built on the foundations of the ancient temple dedicated to the goddess Ceres. And it is precisely to Ceres that we owe the origins of the traditional art of the nativity scene, because in ancient times the citizens offered it as a sign of vote of the small terracotta statues made in the nearby shops. Of course, our tradition is linked to Christianity, but many agree that the custom has drawn much from this ritual. Today, with great skill and passion handed down from generation to generation, the masters work on real works of art, although not only linked to religious figures and symbolism. Every year, in fact, these artists create famous statues, of every height and size, of famous people who have distinguished themselves in positive or negative during the past year. Depending on the case, they are depicted in such a way as to exalt or mock them. And no character, be it politician, showman, sportsman or other, has ever been spared! We remember, for example, Silvio Berlusconi always depicted at the side of a beautiful woman, or the footballer Gonzalo Higuain, guilty of having “betrayed” the blue jersey, visibly overweight! On the contrary, instead, there are some characters who have always been in the hearts of the Neapolitans, who every year are made in an innovative way to pay homage in a way that is never trivial, such as: Massimo Troisi, Diego Armando Maradona, Pino Daniele, or some footballer of Naples strongly representative of the city. And you? Have you ever been to San Gregorio Armeno? Which character would you like to “meet”?

You don't have permission to register